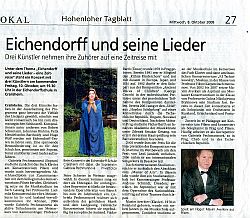 Article about upcoming concert in Germany (in German language) - this PDF file, page 16.

(...) Matching after that: Georg Friedrich H├ñndel's aria "Lascia ch'io pianga" from "Rinaldo", which the soprano Gabriela Pechmannov├í has interpreted exquisitely and accented the sarabande rhythm. (...)

After the pause Gabriela Pechmannov├í performed Czech composers: an aria from Anton├¡n Dvo├©├ík's "Rusalka", sung in a deep and expressive way, and one from Bed├©ich Smetana's "Bartered Bride", which she performed with passion and emphasis. Both times the nuance opulence of Pechmannov├í's voice captivated the audience. (...)